Updated 19 December: In line with the latest government guidance, Hampton Court Palace and gardens will be closed from 20 December until further notice. Please note this also includes the ice rink and Magic Garden. 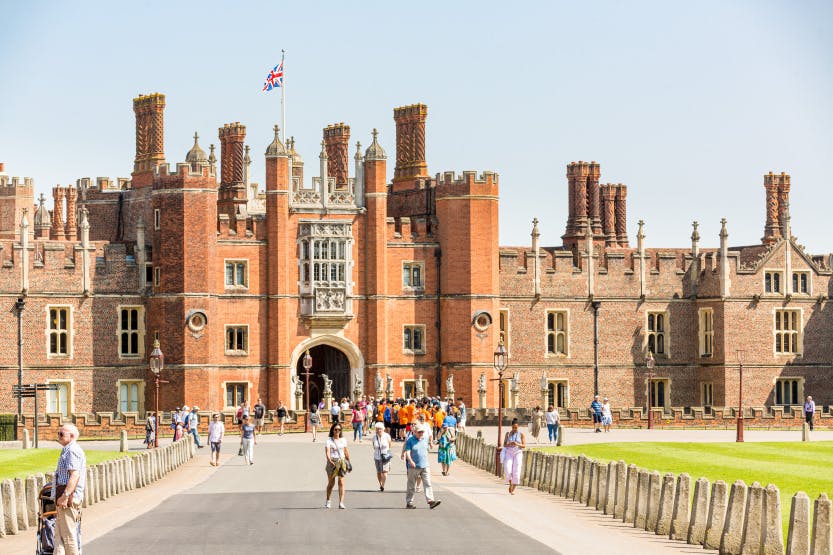 In 1520, Henry VIII and Katherine of Aragon travelled across the Channel with an entourage of over 6,000 courtiers and their servants for the party of the century — an 18-day event known as the Field of Cloth of Gold.

To mark the 500th anniversary of this historic event, Hampton Court Palace will recreate the drama and spectacle of the event with a family-friendly programme of activities and exhibition which we now hope will start later this year.

Explore the painting below which depicts this epic event.

Explore the Field of Cloth of Gold

Henry commissioned a painting of the events at the Field of Cloth of Gold. The painting shows Henry as a young King in his finery and captures scenes of jousting and feasting at which he had once excelled. Explore the details in the painting.

Explore the Field of Cloth of Gold

Below: Henry VIII by an unknown artist, based on a work of c.1542. © National Portrait Gallery, London

Despite bringing so many tents, and constructing a magnificent temporary palace, Henry VIII slept in the relative comfort and security of nearby Guînes Castle. In 1520 Guînes was within an area of English owned territory around Calais.

A giant dragon flew through the sky at the Field of Cloth of Gold, adding to the spectacular occasion. The dragon was in fact a kite filled with fireworks that was attached by a long rope to a waggon that was driven between Ardres and Guînes.

François I demonstrated his magnificence by building a 120ft tall tent covered in cloth of gold and topped with a 6ft tall gilded statue of St Michael.

The creator of The Field of the Cloth of Gold painting used it as the model for the golden tent in which the two kings are shown meeting, but in fact François’s giant tent had blown over in bad weather before the meeting took place. 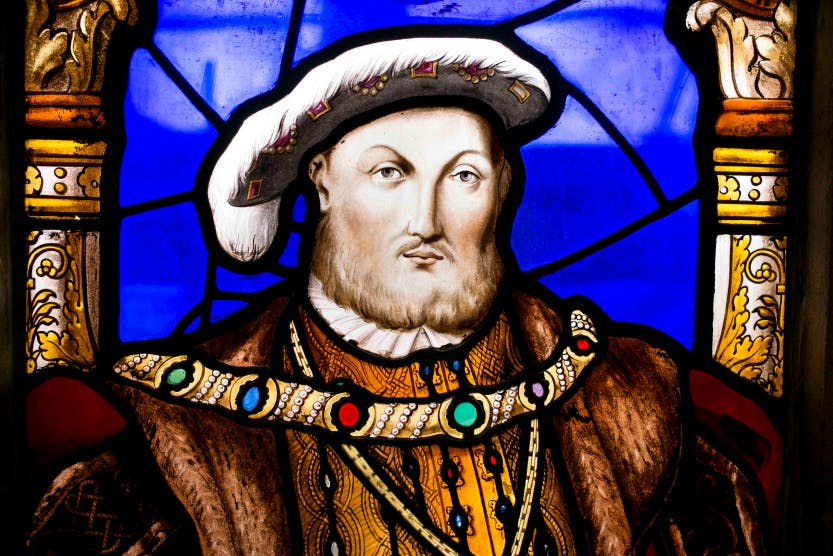 Henry VIII and François I met for the first time on 07 June 1520 in a golden tent. The tent was pitched in a shallow valley called the Val d’Or (Golden Valley) halfway between their two camps.

The English and French retinues stood and watched the momentous occasion from either side of the valley.

Image: depiction of Henry VIII in a stained glass window in the Great Watching Chamber at Hampton Court Palace. 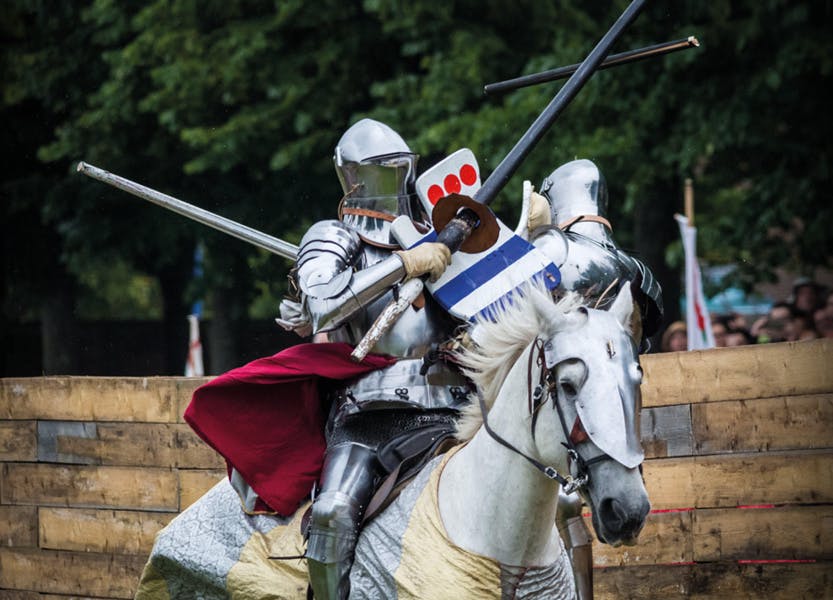 Jousting was the most prestigious tournament event, and was one of Henry VIII's favourite sports.

At the Field of Cloth of Gold Henry and François jousted on the same team so that they did not have to face each other. Jousting could be dangerous and François left the arena with a bloodied nose.

Image: jousters compete on a tiltyard at Hampton Court Palace.

The Tree of Honour

On the edge of the tiltyard (tournament arena) stood an artificial tree with leaves and branches made from silk and cloth of gold. Hanging from the tree were three shields, each representing one of the three tournament sports; jousting, combat on horseback, and foot combat.

To participate in one of these events each knight had to touch the shield of his choosing.

The English Queen Katherine of Aragon and the French Queen Claude of France played an important role in the diplomacy and the entertainments at the Field of Cloth of Gold.

Katherine and Claude, who was heavily pregnant during the event, hosted banquets and masques and handed out prizes to knights who had distinguished themselves in the tournament. Katherine entertained Francois in the English camp while Claude hosted Henry in the French camp.

Learn more about Katherine of Aragon 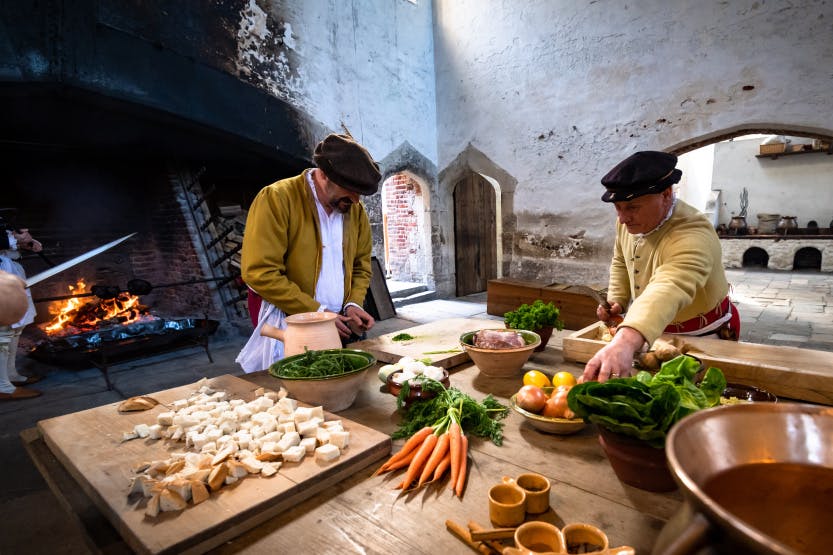 Feeding over 12,000 people who attended the Field of Cloth of Gold was no mean feat. It lasted for 18 days and supplies had to be shipped in from all over England and France. 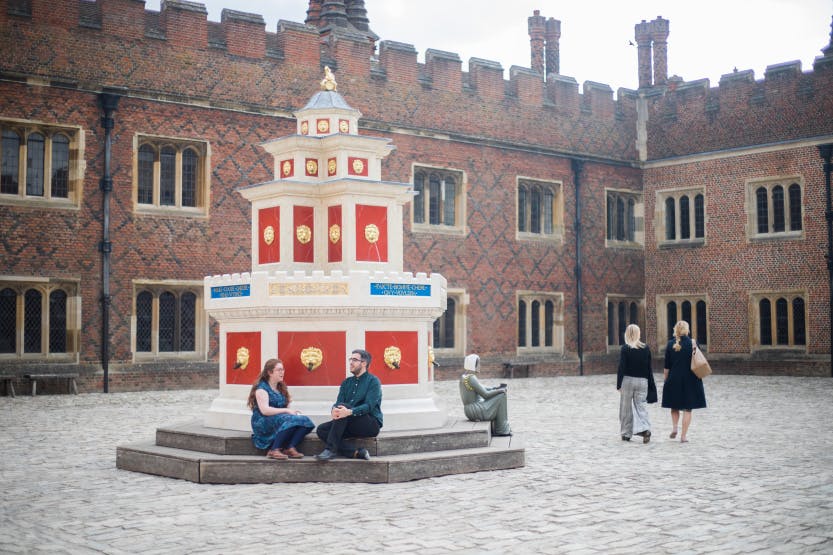 The English, and no doubt the French, brought huge quantities of wine and beer to Guînes in 1520.

Image: a replica of the wine fountain at the Field of the Cloth of Gold, in Base Court at Hampton Court Palace. 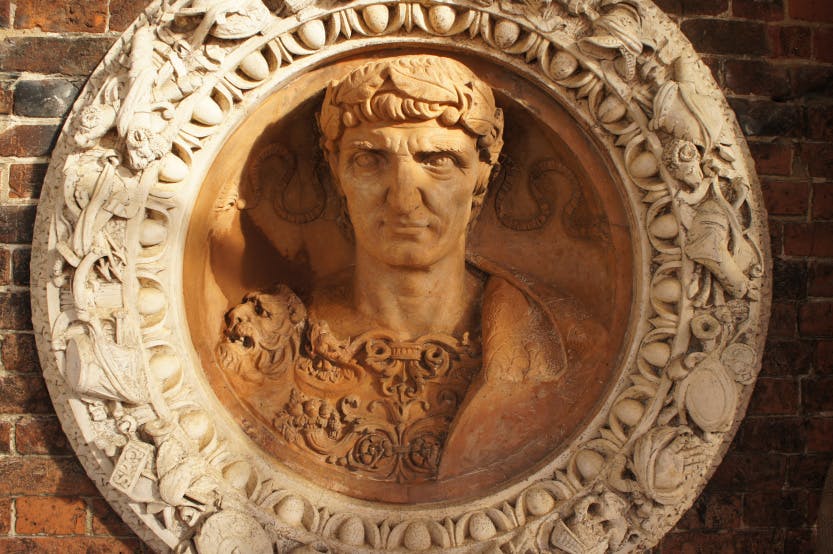 Henry VIII's greatest piece of showmanship was a huge temporary palace, built from timber and canvas that was painted to look like masonry and tiles. Each side of the building was 100m long. In the middle was a large courtyard and to the rear there was a chapel.

The palace was decorated with terracotta roundels like those still visible at Hampton Court Palace (pictured) and all the windows were glazed. There was so much glass that the French called this the Crystal Palace.

Henry VIII processed to meet François I accompanied by a huge entourage. Like the French, the English wore their best clothes – including huge quantities of cloth of silver and gold. This helped to give the Field of Cloth of Gold its famous name.

Cardinal Thomas Wolsey was the mastermind behind the Field of Cloth of Gold and would have been easy to spot in his crimson robes.

Although he later fell from favour, in 1520 Wolsey was Henry VIII’s most trusted and able servant.

Henry VIII loved pageantry and wanted to be the most magnificent prince in Europe. On the first day of the Field of Cloth of Gold, Henry wore a doublet and mantel of cloth of silver, with a real gold belt – even his horse was decorated with real gold bells.

The Field of Cloth of Gold