In late July 1919 one of the most extraordinary but forgotten visits to Hampton Court took place, when a contingent of nearly 1800 troops from the Indian Army, including their British and Indian officers, marched through the palace gates and out onto the golf course on Home Park, where they camped for the next two months.

They returned to a shattered Europe by ship from Mumbai (then known as Bombay) months after the armistice that ended the First World War, to join in the national Peace Celebrations with soldiers from around the British Empire who had fought alongside each other.

Image: Indian troops marching from their camp in Home Park through the Palace gardens, August 1919. © Collection of John Sheaf 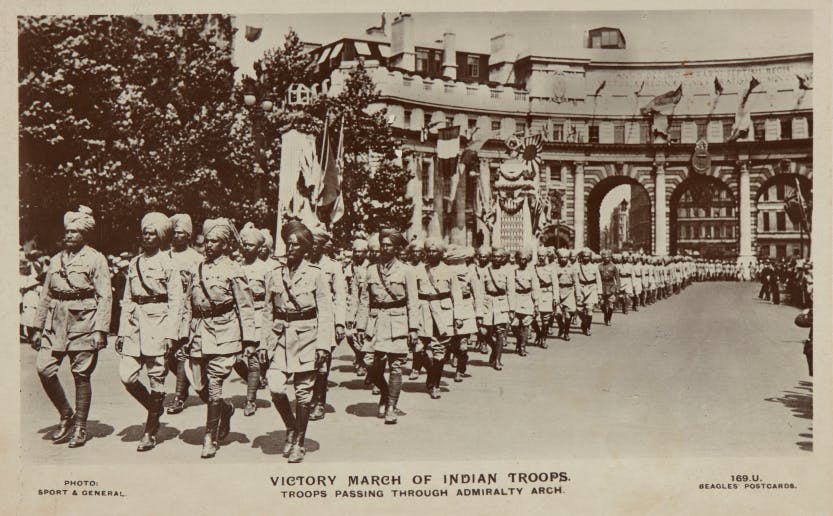 The Indian Army troops were representatives of the more than 500,000 who fought in the war, from the Western Front in France and Belgium, to the Middle East and Far East.

When world war broke out in 1914 there was a reluctance by the British to allow Indian soldiers to fight alongside white troops, but this was soon abandoned as the relatively small British Army and its allies struggled against overwhelming German forces.

The Indian Expeditionary Force arrived in the nick of time.

Do not think this is war. This is not war. It is the ending of the world. This is just such a war as was related in the Mahabharata about our forefathers.

A wounded Punjabi Rajput to a relative in India, 29 January 1915. From a translation in Indian Voices of the Great War/Soldiers Letters, 1914-18 by David Omissi, reproduced with kind permission.

The peace contingent made up probably the largest movement of people from the Indian subcontinent to Britain at the time - certainly from rural India - and made a great impression on the nation, which was captured in the press and even early news reels.

The plan had been for the contingent to join the Victory Parade on the 19th July, but when the Peace Treaty of Versailles was finally signed during their voyage it was obvious they would not arrive in time. When influenza broke out on board ship, very sadly leaving five men dead, their journey seemed fruitless. However, King George V led calls for the troops to have their own parade on 2nd August.

On a blazing summer day they marched past the new Cenotaph memorial in Whitehall, bearing banners with the names of the places across the globe where they had fought.

Crowds turned out to cheer, women threw flowers and bands of Guards played at the head of their parade. The march ended with a review by the King and a garden party at Buckingham Palace, at which 19 year-old Gurkha Naik Karanbahadur Rana was presented with his Victoria Cross.

I heartily thank all my Indian soldiers for their loyal devotion to me and to my Empire, and for their sufferings cheerfully borne in the various campaigns in which they have served in lands and climates so very different from their own. 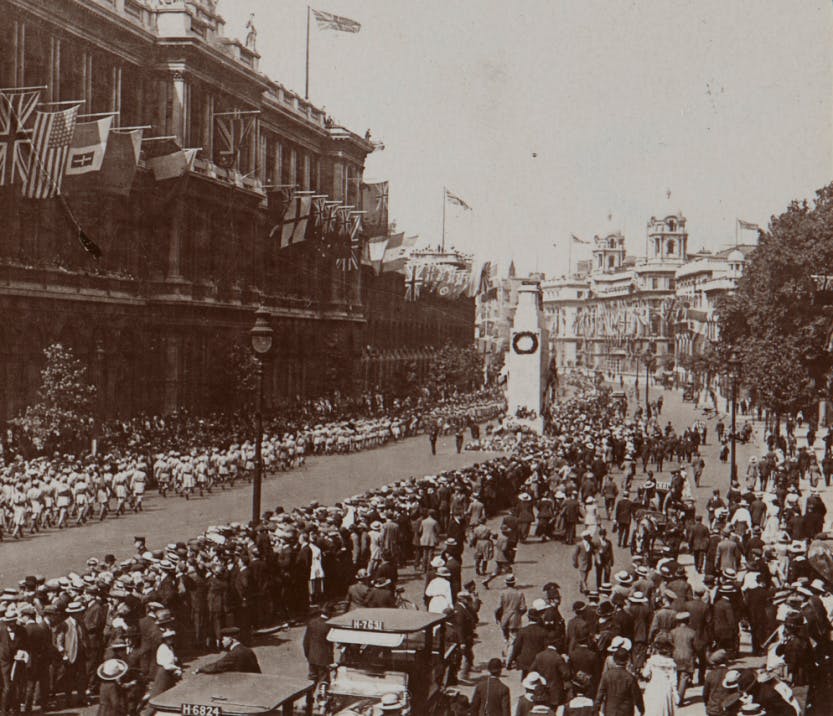 For over six weeks the soldiers were well looked-after and entertained on tours of London and across Britain, as their hosts impressed them with the sights and also the military might of the 'home nation'.

They toured in red London buses - the same buses that had driven some of them to the Western Front in 1914 – visiting the Tower of London, Madame Tussaud’s and a Chelsea football match.

There were trips to a secret warship at Portsmouth dockyard, a bombing demonstration on the River Medway, flights at the Handley-Page aircraft factory and even a trip down the River Clyde from Glasgow.

The camp was laid out along the River Thames, with streets separating the British and Indian officers’ bell tents from the other ranks. This was not the first time Indian soldiers had camped at Hampton Court, as the army fell back on plans made for the coronation celebrations of Edward VII and George V in 1902 and 1910.

Careful arrangements were made to respect the religious and social customs of the different peoples represented by regiments from across India and its modern neighbours – including Sikhs, Muslims and Hindus. There were separate slaughter pens and kitchens, laundries and latrines (dug toilets) run by civilian camp ‘followers’. Entertainments were laid on including a cinema tent provided by the Young Men’s Christian Association as well as organised sports, and the men were allowed to leave camp with a pass.

Behind this forgotten story of British and Indian comradeship in victory hides a much more complicated one of the India’s role in the First World War. The Indian Army was the creation of British colonial rule, built around racial prejudices to secure dominion over the Indian subcontinent. The Peace Celebrations of 1919 brought this great contribution and sacrifice to the public’s attention but as promises of greater self-rule dwindled, this story from the First World War became easier to forget. 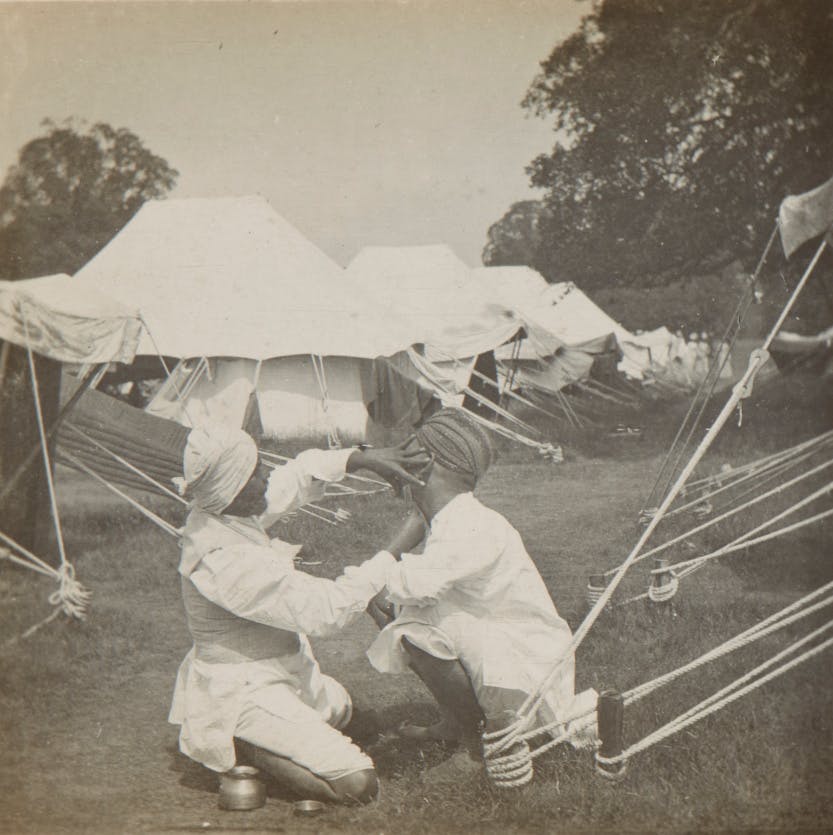 The Indian Empire at War by George Morton-Jack (2018)

The World’s War: Forgotten Soldiers of Empire by David Olusoga (2014) 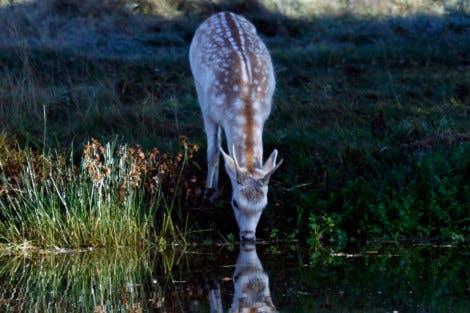 Home Park and the Long Water

Explore 750 acres of wilderness in Home Park - an appointed Site of Special Scientific Interest. Observe ancient trees and rarities from the natural world.