A new naturalistic landscape in the moat

The Tower of London Superbloom is a new natural landscape in the moat and in the heart of the City of London.

Over nearly 1000 years, the moat has seen many changes; it was filled with water in the 13th century to defend the famous fortress, drained at the request of the Duke of Wellington in the 1840s, then used as a grazing ground for livestock, before being used as allotments during the Second World War. This year, a new natural landscape has been created in the moat. It will have a long term legacy, gradually becoming a new haven for wildlife in Central London.

In March 2022, 29 flower species were planted in the historic Tower of London moat to create Superbloom. The project aimed to bring diversity of nature to this urban environment and the moat has successfully become a welcoming new habitat and a green haven for pollinators, insects and seed-eating birds.

With record breaking temperatures and prolonged dry weather in London, many of the plants have flowered much quicker over a short period than would normally be the case, so Superbloom is now entering into its next phase of a natural cycle. This is an evolving display and it will now start to move from a sea of colours and scents to seed heads, ready to help us re-seed the landscape again next year. When the display ends, the new, natural landscape created to support it will remain in the moat, providing wildlife with a new home at the Tower.

Planting in the Queen's Garden.

20 million seeds are sown in the moat for the spectacular floral display to celebrate the Queen's Platinum Jubilee.

The Nest designed, built and woven by Spencer Jenkins was installed on 17 March. Made using willow, it is a space to pause for a moment as you walk through the moat.

Work started in the moat for Superbloom installing 10,800 metric tonnes of soil and 2.4m of drainage, where 20 million seeds are sown.

Over 20 million seeds from 29 flower species, each species has been specially selected for its colour and ability to attract pollinating insects.

Learn more about the pollinating insects that can be found in the Tower moat and in your own garden.

Discover 9 surprising facts about the Tower of London moat and the changes it has experienced over its nearly 1000 year history.

Facts about the moat 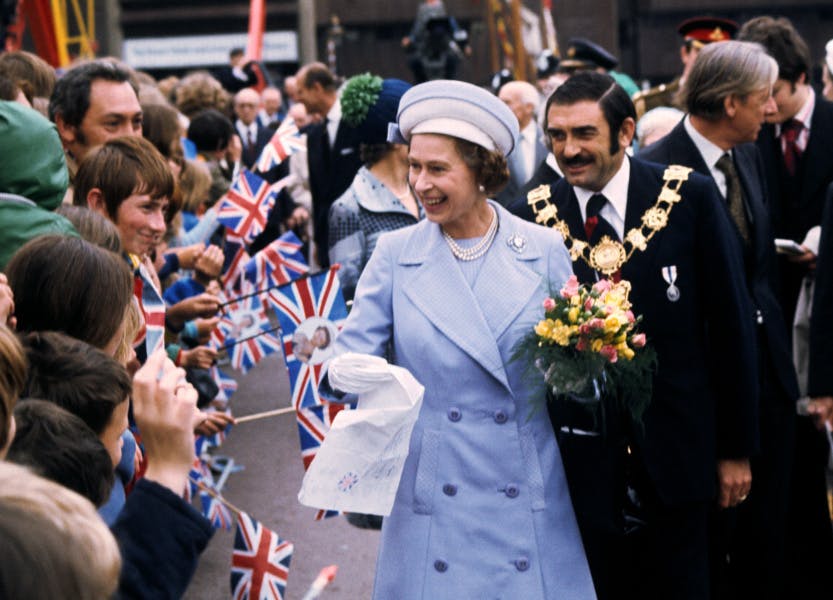 A History of Royal Jubilees 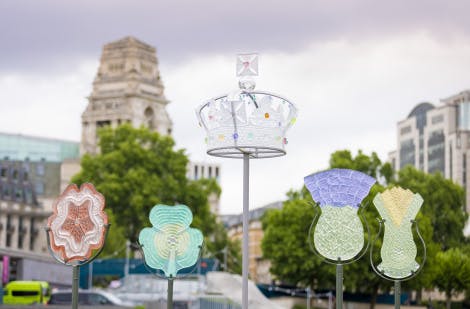 A specially designed 'Queen's Garden' has been created as part of the Tower of London Superbloom. The concept for the garden has been developed by Andrew Grant and James Clarke of Grant Associates, the lead designers for the Superbloom project. Drawing on the colours, shapes and motifs used by Hartnell for the coronation gown it is intended to evoke the scalloped tiers of embroidery which feature on the gown’s silk skirt.

12 cast glass forms representing the national emblems featured in Hartnell’s embroidered design, including the thistle of Scotland, the Australian wattle and Canadian maple leaf rise from the garden. In the centre, sits a glass crown, a reminder of the Tower of London’s ancient role as home of the Crown Jewels; the sacred regalia used in Her Majesty’s coronation, and those of previous British monarchs. Specially created for the Queen’s Garden by glass artist Max Jacquard, these hand-crafted artworks will catch the light and provide an elegant visual spectacle.

The scheme was designed by Historic Royal Palaces, working with Grant Associates - Landscape Architects and Lead Design Consultant, and University of Sheffield Professor of Planting Design, Nigel Dunnett – both of whom have extensive expertise in urban horticulture and landscape design. The display follows a one-way route along winding willow-lined paths set to a specially commissioned soundscape by composer Erland Cooper with sculptural elements including 'The Nest' designed, built and woven by Spencer Jenkins and metal insect sculptures by Mehrdad Tafreshi.

Create and share your own Superbloom in augmented reality. Virtually plant seeds wherever you are to see the flowers grow all around you and spot the pollinators attracted to the blooms. If you cannot visit the Tower of London Superbloom this summer, you can recreate the experience wherever you are with this app, using augmented reality powered by Niantic's Lightship. The ‘Tower Superbloom AR’ app is free and available to download from the Apple and Google Play stores.

Schools across the UK have been taking part in Superbloom by creating their own Jubilee flower gardens and keeping us updated on their progress.

This social story is provided as an aid for children and adults with an Autism Spectrum Condition.

Superbloom is generously supported by: