Updated 19 December: In line with the latest government guidance, Hampton Court Palace and gardens will be closed from 20 December until further notice. Please note this also includes the ice rink and Magic Garden.

Meeting point is the East Front gardens at 15:00 for the blessing of the shire horses.

Blessing the Shire horses at The Chapel Royal

The Shire horses at Hampton Court are part of the last herd of working Shire horses in London. They live in Home Park, where they also help maintain the wildflower meadows.

Each November, on Shire Horse Sunday, the whole herd is blessed by HM's Chaplain prior to evensong at The Chapel Royal.

Nearly 500 years ago, Henry VIII started the process to acquire the ultimate war horse. In 1535 and 1540, he instigated two acts that governed the breeding of horses in England, with the aim to develop a horse that could carry a man in heavy armour into battle.

The King is credited for naming this powerful new breed of horses Shire – from the Saxon word schyran, which means to shear or divide, hence the name synonymous with 'county'.

Since then, the Shire has become important both in agriculture and industry, until the combustion engine took over, making them almost disappear overnight.

Horse-drawn vehicles such as the tram became popular during Victorian times at Hampton Court, after Queen Victoria opened the gardens to the public in 1838. 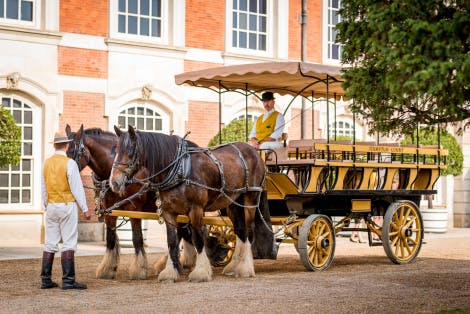