Walk Henry VIII’s route from his private apartments to the Chapel — now lined with portraits of Tudor monarchs — and see the infamous Haunted Gallery in the State Apartments at Hampton Court Palace.

In 1541, Catherine Howard, Henry VIII’s fifth wife, discovered that she was to be charged with adultery — a charge for which her predecessor, Anne Boleyn, had been executed.

Legend has it that the terrified young queen broke free from her guards and ran along what is now called the Haunted Gallery in the hope of finding Henry in the Chapel, to plead her innocence.

Just before Catherine reached the door, she was seized by guards who took her screaming back to her rooms.

Catherine was executed at the Tower of London three months later; her body still lies in the Chapel Royal of St Peter Ad Vincula, within the Tower walls.

Catherine’s ghost can, allegedly, be seen running through the Haunted Gallery at Hampton Court Palace, screaming for mercy.

The Processional Route and Tudor portraits

The King's 'Coming Forth' from his private apartments to the Chapel, on Sundays and special holy days, became the principal occasion when Henry VIII made himself visible to his wider court.

Today, the route is lined with portraits of Henry and his family, including his father Henry VII, his mother Elizabeth of York and his children.

Highlights of the Processional Route

Among the paintings that now line the Processional Route is an extraordinary dynastic portrait of Henry VIII and his family. The portrait shows the King at the centre, flanked by Jane Seymour, his third wife, and their son, Prince Edward (later Edward VI).

To either side of Henry’s canopy of state are Henry’s two daughters, who would later become Mary I and Elizabeth I.

The dynastic portrait is unusual in that it depicts an imaginary scene; Jane Seymour had in fact died shortly after giving birth to Edward, eight years before the portrait was painted. 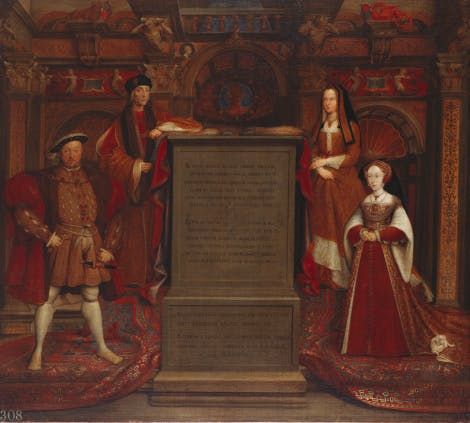 Henry VIII’s court artist Hans Holbein immortalised the King in his portraiture. At Whitehall Palace, he painted a life-size mural of Henry, together with his father Henry VII and their queens.

The original mural was destroyed by the fire that burnt down Whitehall Palace in 1698. Only later (much smaller) copies survived; this one, which was painted for Charles II, is the only surviving complete record of the mural.