The Great Watching Chamber was the first of Henry VIII’s State Apartments beyond the Great Hall. Here, members of the Yeoman of the Guard stood ‘watch’ and controlled access to this important part of the palace; only visitors of high rank were permitted to enter.

Those deemed important enough were then led through the doors at the end of the room into a sequence of further chambers, each one more exclusive than the last. This royal ‘filtering system’ was designed to restrict access to the King and to channel people to the spaces appropriate to their rank.

The Tudors and the Seymours

As you admire the gilded ceiling, see if you can spot Henry VIII's royal coat of arms and the personal badge of his third queen, Jane Seymour: a phoenix rising from a flaming tower.

These powerful symbols of the Tudors were included here to remind visitors of the dynasty's power and claim to the throne. They were also part of the astonishingly vibrant colour scheme at the Tudor palace of Hampton Court, amidst painted floorboards, shimmering tapestries and richly dressed courtiers.

The Great Watching Chamber under the Stuarts

The Stuart kings and queens also used the Great Watching Chamber. Sir Christopher Wren added the wooden panelling for William III at the end of the 17th century – so the room today is a mixture of Tudor and Stuart furnishings.

Court entertainment in the State Apartments did not die with Henry VIII. When the Stuart courtiers had finished dancing in the Great Hall, the partygoers piled into the Great Watching Chamber to eat.

One observer records them pouncing on the food 'like so many harpies… they upset the table and the crash of glass platters remind me precisely of a severe hailstorm at Midsummer smashing the window glass'.

The tapestries that line the walls of the Great Watching Chamber today include a selection of those that survive from the collection of Thomas Wolsey, Henry VIII’s chief minister.

Learn about the new Smart Tint windows installed in the Great Watching Chamber to help protect the 16th-century tapestries in this short film.

Most of the tapestries are part of the Royal Collection. 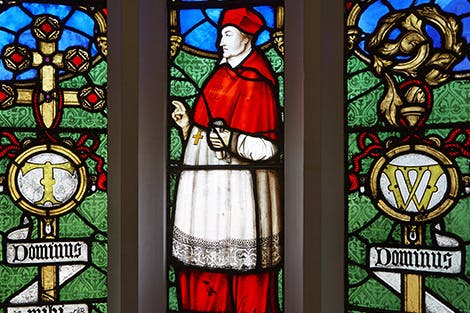 Wolsey acquired Hampton Court in 1514 and transformed it from a manor house into a palace in which to entertain the King. Wolsey was not only the most important statesman in England, but he was also one of the leading political figures in Europe, and a cardinal in the Roman Catholic Church. He collected over 600 tapestries and other treasures, but lost it all to the King, when he spectacularly fell from power in 1529.

The tapestries all tell Biblical or moral stories. They stressed the kind of virtues a courtier like Wolsey was meant to represent, but also emphasised how powerful and rich he was.