Hampton Court Palace will be closed on Wednesday 19 May 2021.

The Triumphs of Caesar are nine huge paintings that are amongst the finest achievements in Renaissance art. They were painted by Andrea Mantegna, one of the most famous and important artists of the early Italian Renaissance, for the Gonzaga family palace in Mantua, probably between 1484 and 1506.

Charles I bought the entire Gonzaga art collection, including paintings by Titian, Caravaggio and Raphael, as well as Mantegna’s Triumphs, at the end of the 1620s. Soon after their arrival in England, the Triumphs were brought to Hampton Court Palace, which has remained their home ever since. They have been here for nearly 400 years.

The nine paintings show the ancient Roman ruler Julius Caesar on a triumphal chariot returning from his successful military campaigns. He is in a procession of Roman soldiers, standard-bearers, musicians and the spoils of war: captured weapons, artworks, gold and silver, prisoners, and exotic animals including elephants!

Ancient Rome was one of the strongest and richest empires in all of history. Later rulers, like Charles I, collected Roman sculpture and imagined themselves as Roman emperors.

Andrea Mantegna was a Renaissance artist whose paintings brought back to life the triumphs and glory of the ancient Roman world. The Triumphs of Caesar were described as ‘the best thing Mantegna ever painted’ by Giorgio Vasari in the 16th century, and they are still celebrated as masterpieces today.

Find out more about The Triumphs of Caesar on the Royal Collection Trust website. 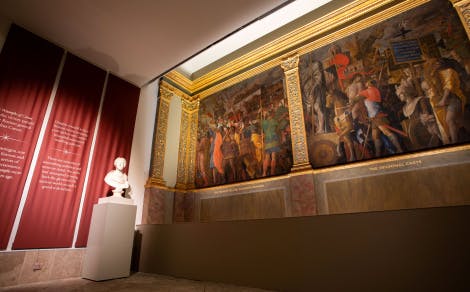 "Hampton Court would be foolish without Mantegna." 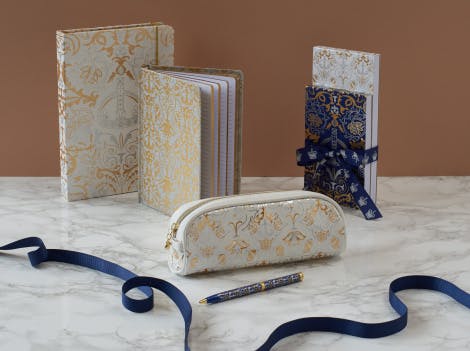 Our stationery collection ranges from greetings cards, notebooks and pens to calligraphy sets and unique home and desk accessories.