The garden in Chapel Court was created to mark the 500th anniversary of Henry VIII's accession to the throne, and evokes his court and the story of his reign.

The basis for the new scheme is the garden depicted in The Family of Henry VIII (c1545), which hangs in the Haunted Gallery. This portrait shows a contemporary garden at Whitehall Palace, bristling with 'Kyngs beestes' perched upon lofty painted posts. The beasts are set in a garden criss-crossed by green and white painted post and rail fencing, encompassing beds sprinkled with herbs and flowers.

The planting incorporates alternating displays of herbs and flower varieties, which were available in England in the 16th century.

The designs of our new beasts are based upon drawings produced in the early 16th century, now in the College of Arms, and their bright livery reflects the traditional Tudor heraldic colour schemes.

Each beast is carved in English oak and has a special significance in the iconography of Henry VIII. 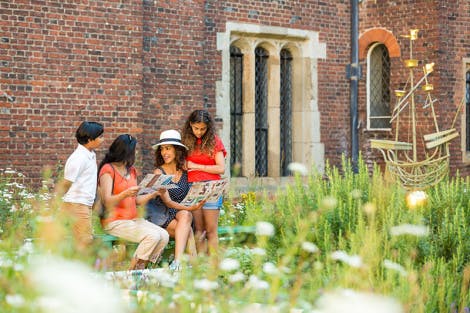 The choice of plants throughout the garden has been guided by an interest in creating a tapestry of fragrant, symbolic and utilitarian (apothecary) herbs and flowers that evoke the period, including:

Some plants such as Broom or Greenweed (Genista tinctoria), Woad (Isatis tinctoria) and Dyers' Mignonette (Reseda luteola) are also included as they were commonly used for the production of 16th-century textile dyes.

The selection of plants is based on surviving records, including William Turner's 'A new herball, wherin are conteyned the names of herbes' (1551), and Gerard's 'Herball' (1597).

The borders of each of the beds are set with alternating rows of wild strawberries and sweet woodruff. The garden paths are laid with as-dug hoggin and crushed oyster shell paths. 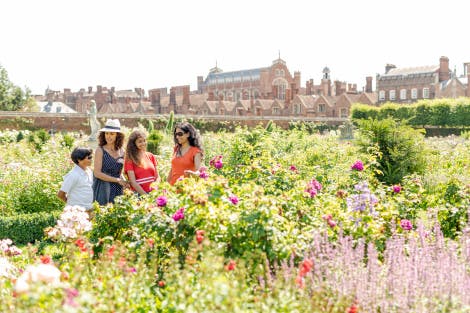 Discover an abundance of colour in the grounds of the historic Tudor buildings at Hampton Court Palace.

Centuries of ghosts and grim tales