Discover magnificent artworks from the Royal Collection, including paintings by Rembrandt, Caravaggio and van Dyck

Please note that the gallery will close for painting rotations and adjustments to lighting from 04 January 2022 - 07 January 2022.

The Cumberland Art Gallery houses a changing display of artworks, principally from the Royal Collection, reflecting Hampton Court Palace's long history as a place to see great art. The palace was a royal residence from the early 1500s until the 1730s. This era saw great royal collectors and connoisseurs, like King Charles I and Frederick, Prince of Wales, assemble one of the largest and finest art collections of its kind in the world. The royal family filled the State Apartments at the palace with artworks for their private enjoyment and as magnificent statements of regal authority.

A masterpiece at every turn

After the palace’s life as a royal residence came to an end in the eighteenth century, Hampton Court Palace became a grand art gallery, displaying paintings and treasures for visitors to enjoy. You can see hundreds of artworks from the Royal Collection at the palace today, some of them in their original locations. Here, in the Cumberland Art Gallery, you can marvel at a selection of the Royal Collection’s finest paintings.

The Cumberland Art Gallery occupies a restored suite of rooms designed in the 1730s by William Kent for William Augustus, the Duke of Cumberland and youngest son of King George II. In 2014, after two years of meticulous research, Kent's Cumberland Suite was returned as closely as possible to his original scheme.

The creation of the Cumberland Art Gallery was made possible through the generosity of the Foyle Foundation and Bruce and Jane Carnegie-Brown.

For conservation purposes photography is not permitted in Cumberland Art Gallery.

Due to the nature of items on display, and the size of exhibition spaces, we limit visitor numbers in the Cumberland Art Gallery. Larger groups will be asked to divide into smaller parties and admission may be staggered at the discretion of staff. This is to avoid congestion during peak times to ensure the enjoyment of all visitors.

We thank you for your understanding. 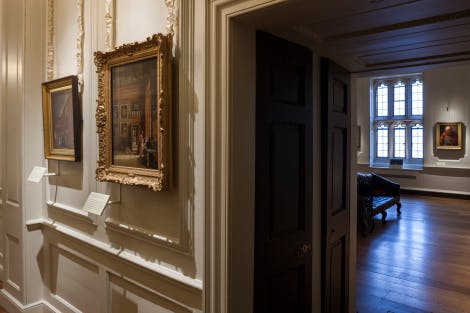