Queen Charlotte’s Cottage was built around 1770 for Queen Charlotte, the Consort of King George III. It is an example of the cottage orné, the rustic cottage exemplified, albeit on a somewhat grander scale, by Marie Antoinette’s Hamlet at Versaille, where royalty and nobles would play at being peasants. Although they never met, Queen Charlotte and Marie Antoinette corresponded, and it is possible that it was from her French counterpart that Charlotte developed the idea of building a cottage orné here at Kew. The Cottage and its grounds enabled Charlotte to indulge her love of the simpler things and the natural style of gardening that her gardener at Richmond, Lancelot ‘Capability’ Brown, was a specialist in.

Walk around to the back of the Cottage.

Here we have that mirror image of the opposite side of the Cottage, with the two flanking wings with doorways, and the central section of the building with the two windows one above the other. These windows are 17th century with leaded panes, chosen to enhance the ‘rustic’ look of the building. Likewise the all of the doors have been intentionally battened at odd angles with their supporting ledges facing outwards instead of internally. The walls are built from ‘place’ bricks, which were of a lower quality and never normally used on facing masonry. It is possible that initially at least parts of the walls were rendered. The timber frames that thread throughout this brickwork are covered with carpentry marks, which may suggest a degree of prefabrication, although some of them are rather indiscriminate and may simply be there to add to the rustic appearance of the building. To complete the rustic feel of Queen Charlotte’s Cottage, its roof is covered in Norfolk reed thatch.

Walk around to the front of the Cottage.

When Queen Charlotte’s Cottage was built it overlooked a menagerie. It was incredibly fashionable in the mid-18th century for wealthy British nobles and royalty to display this wealth by collecting unusual examples of wildlife from across the Empire. Initially at the Cottage, Queen Charlotte housed a selection of exotic birds, including golden pheasant, a number of which still live in the gardens today. They are incredibly shy, but every so often will make an appearance. By 1792, a group of Kangaroo, some of the first to arrive in England, had been introduced to the menagerie. These began to breed, their numerous offspring being offered to unenthusiastic courtiers in an attempt to prevent the gardens being overrun. Sadly we do not have any here today.

The main purpose of the Cottage, however, was to provide the perfect location for the Queen and her family to retreat to for tea or a private picnic during long summer walks through the gardens.

The Royal Family would not have carried their own picnic with them, and so the Cottage is equipped with a small kitchen in which servants could plate up food transported from the Palace. Servants would have entered through the door to your right, which leads via an entry hall to the kitchen. The Royal Family would have entered through the door to your left which leads to a grander entry hall, the main staircase, and the two principal rooms of the Cottage. These two rooms occupy the central section of the building.

On the ground floor is the Print Room, so named after the 166 satirical engravings that decorate the walls, most of which are after Hogarth, famous for his moral progressions. These were of ‘elegance and humour’ according to The London Magazine of 1774, although the writer could not believe that certain political scenes were a suitable choice for a queen.

The upper room is the Picnic Room, where the Royal Family would have gathered to take tea, and look out of the full height windows over their menagerie and gardens. This room is decorated with trailing nasturtiums and convolvulus. They are believed to be the work of Princess Elizabeth, the most artistic of the daughters of George III, and may have been part of her preparations for the King’s intended visit in 1805. Sadly the occasion was rained off and the King would never again visit Queen Charlotte’s Cottage.

In fact the Cottage would rarely be used again; the final major Royal visit taking place in July 1818 when the family arrived to take tea here following the double wedding at Kew Palace of George III and Queen Charlotte’s third and forth sons, William Duke of Clarence, later William IV, and Edward Duke of Kent, the father of Queen Victoria.

It is thanks to Queen Victoria that we are now able to enjoy Queen Charlotte’s Cottage ourselves: in 1898, to celebrate her diamond jubilee, Victoria gifted the Cottage and its grounds to the public. 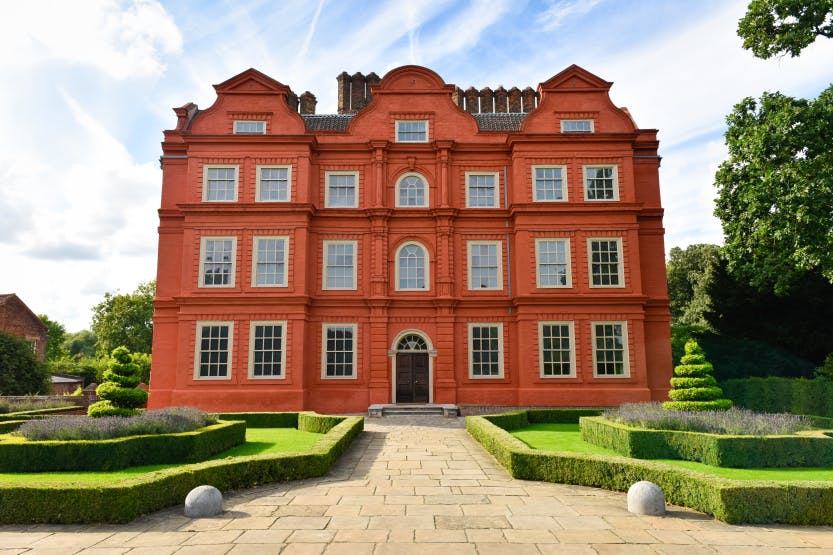 We urgently need your help

The Coronavirus pandemic has had a devastating impact on us. We are facing a £95 million shortfall in our finances this year – an income reduction of over 85% - we need your support now more than ever, to sustain the charity through this difficult period.